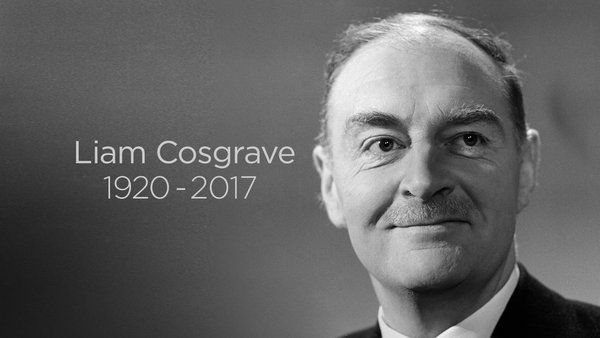 Seán Kelly MEP and Leader of the Fine Gael Delegation in the European Parliament has paid tribute to former Taoiseach and former Fine Gael Leader Liam Cosgrave, who passed away yesterday aged 97 years.

“We mourn the passing of one of Ireland’s greatest leaders, Liam Cosgrave. He was a brave and intelligent leader who always put the country’s interest first,” Mr Kelly said today, speaking from the European Parliament in Strasbourg.

The Ireland South MEP further noted the sadness at the news of Mr Cosgrave’s passing at European level. Many European People’s Party colleagues have underlined the former Taoiseach’s many achievements and firm place in history, noting that Fine Gael became a founding member of the EPP in 1976, when Liam Cosgrave was Taoiseach and Leader of Fine Gael.

“In recent years, I had the pleasure of meeting him frequently at matches in Croke Park. I found him to be a very fair, well informed, courteous and friendly,” Mr Kelly added.

“I want to extend my deepest sympathies to his family and friends. Ar dheis Dé go raibh a anam.”