Work of the INTA Committee

The chief responsibilities of the INTA Committee relate to the European Union’s common commercial policy and its external economic relations. The main tasks of the Committee are to deal with the EU’s financial, economic and trade relations with third countries and regional organisations, which includes the creation of free trade agreements (FTAs) with other states and standardising trade across the bloc. 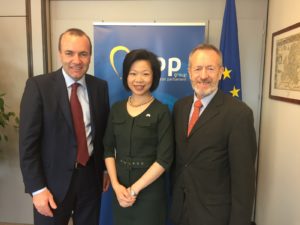 I have been appointed to steer negotiations for the EU-Singapore FTA in the European Parliament on behalf of my group, the EPP, given my role in the delegation for relations with the countries of Southeast Asia and the Association of Southeast Asian Nations (ASEAN).

Singapore is the EU’s largest trading partner in the Southeast Asia bloc. The EU-Singapore Agreement will further solidify the business relationship between Ireland and Singapore where total merchandise trade in 2016 was valued at €987bn. Singapore and Ireland share many similarities from small, open economies focused on exports to comparable economic strategies. Singapore is currently home to approximately 2050-3000 Irish expatriates with over 10,400 EU companies operating on its territory, serving as a hub in the Pacific Rim.

The EU-Singapore deal is considered a stepping stone to similar deals with other countries in that region. I was pleased that the European Court of Justice reached a decision in May 2017 on Singapore FTA clarifying which competences are the EU institutions’ and which Member States’. Most notably, this decision concerned Investor-State Dispute Settlement (ISDS) chapter which the Court ruled would have to be approved by both EU institutions and Member States. I am also glad that the European Commission has already started working on an acceptable alternative to ISDS, called Investment Court System, which along with the ECJ’s decision, will allow for all currently negotiated and future FTAs to be properly worked out and concluded.

The predicted economic benefits of CETA for Europe and Ireland are undeniable: an annual €12 billion GDP boost for the EU, with an estimated €1.2 billion boost in exports for Ireland. Ireland has an export-orientated economy. 80% of everything we produce is exported and tens of thousands of Irish jobs depend on trade and agreements. Ireland is also Canada’s fifth largest investment recipient and CETA will create better investment opportunities, increase competitiveness, and encourage innovation.

CETA is also hugely important for its geostrategic impact. Over one-fifth of our exports go to the US. However, current policies of the US administration are unpredictable and lean towards protectionism as evidenced by the US’ withdrawal from the Trans-Pacific Partnership, changes to the rules of federal regulation and possible tax cuts. We cannot be certain how these policies will affect Irish businesses, but the latter would, without a doubt, impact Ireland’s exports and foreign direct investment.

The potential negative implications of Brexit on Ireland are well documented, and we cannot ignore the severity its impact will have on this country. Meanwhile, new world powers such as the BRIC countries of Brazil, Russia, India and China, continue to rise while turbulence persists in the Middle East, Turkey and elsewhere. The EU needs to take such factors into consideration, and secure reliable trading relationships in order to preserve our economic competitiveness and our status as the world’s largest economy.

Ireland has seen how much trade can help to secure and create jobs, and CETA will allow us to grow even more. Every €1 billion in exports supports 14,000 European jobs. The EU-South Korea trade deal resulted in 210,000 new jobs in Europe. Small and medium sized enterprises (SMEs) will benefit most. Removing the barriers to trade and providing clear rules for SMEs will create a more competitive trade and export environment. 99.7% of Irish businesses are SMEs and they need our support to continue to grow and create more jobs. 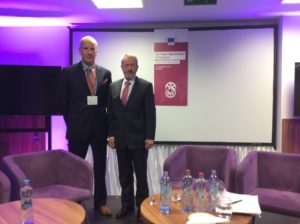 Irish spirits industry exports 95% of its produce to over 80 international markets per annum. As the eighth largest spirit producer in Europe, this industry contributes approximately half a billion euro to the Irish economy per year. 10.2 billion euros in spirits is exported annually from the EU. I have been appointed to lead the negotiations on a legislative file on behalf of the EPP Group. The legislation, ‘Definition, presentation and labelling of spirit drinks, the use of the names of spirit drinks in the presentation and labelling of other foodstuffs and the protection of geographical indications for spirit drinks’, introduced measures that will improve EU-wide regulations regarding the sale and marketing of spirits.