Work of the ITRE Committee

My lead committee in the European Parliament is the Industry, Research and Energy (ITRE) Committee. The ITRE Committee is one of the most active ones in the European Parliament, ranking near the top in terms of legislative files. As a result, the decisions taken in ITRE have a direct impact on the daily life of citizens and the European economy. Working alongside my colleagues in ITRE, I aim to introduce measures that boost innovative job creation both in Ireland and Europe.

The work of the ITRE Committee covers a broad range of sectors, including but not limited to: industrial policy and the application of new technologies; the research and innovation policy of the European Union; the European Union’s Energy policy; and the information society and information technology. In this context, I focus particularly on the areas of renewable energy, energy efficiency and the digital agenda. Over the last number of years, I have been involved in the preparation of a number of legislative proposals relating to these issues. 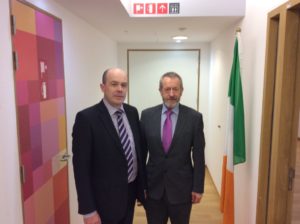 A great deal of my work is done in the area of Climate Action. As a result, I led discussions ahead of the Paris Climate Agreement and represented the European Parliament in both the 21st Conference of Parties (COP21) in Paris and COP22 in Marrakesh.

In Paris, history was made as an ambitious and binding global agreement was agreed upon: “the Paris Agreement”. This included provisions to peak global emissions, reach net-zero emissions in the second half of this century, and keep global average temperature increases to well below 2oC, while making efforts to keep increases below 1.5 oC.

At COP22 in Marrakesh, negotiations were concentrated on how we monitor and achieve our commitments following post-COP21. Policymakers and experts came together to discuss how emissions from deforestation and forest degradation may be reduced, how carbon stocks along coastlines may be enhanced and the power of ecosystems harnessed to adapt to Climate Change.

When it comes to climate action, the EU very much leads the way in terms of effort and ambition. The EU has committed to reducing emissions by 40% by 2030, along with a reduction of at least 80% in domestic emissions by 2050. My work on the Renewable Energy Directive will play an essential role in developing legislation to ensure that alternative schemes are adopted in order to reduce carbon emissions across the European Union.

As ITRE Committee rapporteur for the EPP on the 2030 climate targets, I have been working extensively on the Effort Sharing Regulation (ESR) for

the period 2021 – 2030. This Regulation sets targets that cover all emissions except for large power plants and industrial installations, which fall under the scope of the EU ETS. The sectors most affected by the Effort Sharing Regulation therefore include agriculture, transport and buildings. From an Irish perspective, I have been working hard to ensure that provisions applying to the agricultural sector in particular prove both fair and effective.

Working alongside my colleagues in the ITRE committee on the ESR file, I endeavour to ensure that proposals in relation to emissions targets are balanced and pragmatic, with consideration of national and/or regional circumstances. Ireland’s high share of agriculture in our energy mix must be taken into consideration and as one of the few MEPs who has committed to fighting for optimal solution for both Irish farmers and our climate targets, I will do my utmost to push for the necessary adaptations over the coming months. Agriculture is a part of the solution, not the problem, and this needs to be recognised.

The EU Emissions Trading System (ETS) is a cap and trade system whereby overall emissions in large-scale industrial plants are capped, while companies receive or buy emission allowances which they can trade with one another as needed. This system operates in 31 countries including Ireland, covering 11,000 installations and 45% of the EU’s greenhouse gas emissions. The ITRE Committee worked tirelessly on this Directive and I view the Parliament’s final position on the ETS as strong and balanced. I hope it will stimulate investment to allow for cost effective emissions reduction in the industrial sector.

To most people, increasing Energy Efficiency represents an obvious policy choice both for economic and environmental reasons. Reducing our energy use means lower energy costs for consumers, it means less dependence on external energy suppliers, and it means a reduced carbon footprint by cutting our Greenhouse Gas (GHG) emissions. Add to this the boost to employment levels that Energy Efficiency can bring to different sectors by increasing the demand for new systems and renovations and it becomes evident that benefits of striving for a more energy efficient system are multiple.

In addition to energy efficiency, it is crucial that we clear up the energy we do use, and for that reason I am a strong advocate for harnessing Renewable Energy. With costs coming down, Renewables are becoming increasingly competitive with fossil fuels and we may be just a few more innovative breakthroughs away from an energy system based on Renewables.

In Brussels, we are currently reviewing the Renewable Energy Directive, the Energy Efficiency Directive, the Electricity Market Design, and the Energy Performance of Buildings Directive. At the same time, legislation is being put in place to ensure emissions reductions are achieved in the Emissions Trading System (ETS) and non-ETS sectors (farming, transport and buildings) up to 2030. I feel it is crucial that we get the balance right to ensure the complementarity of all parts of this legislation, and that includes helping to stimulate cost-effective investments in energy efficiency. 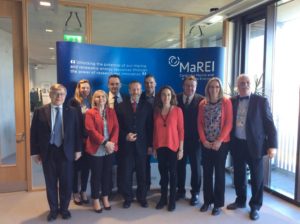 In early 2017, I was appointed as the EPP’s lead negotiator on the Renewable Energy Directive in the European Parliament. The Renewable Energy Directive is one of the major parts of the ‘Clean Energy Package’, which sets out comprehensive goals and targets for EU Member States moving towards a low carbon energy market, including the promotion of renewable energy sources.

In July 2015, the European Commission adopted a Communication on Delivering a New Deal for energy consumers as part of the Summer Energy Package and I was pleased to be appointed in the European Parliament as lead negotiator on these issues on behalf of my group, the European People’s Party (EPP).

The New Deal highlights the need for greater transparency around energy prices. It also emphasises the importance of easy switching between energy suppliers and calls for the phasing out of regulated retail prices, which discourages market competition and investment in infrastructure. This deal is centred on the principle of empowering the consumer to control their energy use and lower their bill. The Irish market is already well on its way to being competitive and we want to continue on this path. 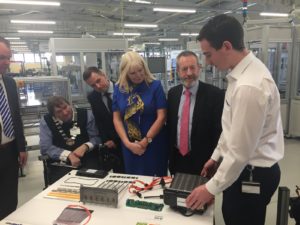 A thriving digital economy is one of the cornerstones of growth and employment in the EU. However, barriers remain that prevent us from achieving its full potential. Europe’s digital market remains heavily fragmented. However, for the last number of years, work has been ongoing in Brussels to achieve and implement the Digital Single Market. This has the potential to bring up to €500 billion in additional economic growth in the EU, along with a great boost to job creation. This means more cross-border services, more innovative online services at competitive prices, easier access for businesses into cross-border markets. The opportunity here really is enormous and we, as policy makers, owe it to our entrepreneurs to remove burdensome obstacles to the achievement of their potential – and that means providing a single digital market with a balanced regulation.

In this area, my priorities include the establishment of high-speed networks, bolstering the digital single market, bridging the digital divide and providing better targeted support for ICT research and innovation. From an Irish perspective in particular, I have been working to ensure better access to broadband. This is the single most important issue for the success of the digital agenda; we need to aim for broadband speeds of 100+ MB like our competitors. The digitisation of rural Ireland is akin to the electrification of Ireland, the influence of the digital economy will be the driving force in balancing the rural economic environment. It is refocussing the lens on rural communities as centres of innovation and enterprise.

Furthermore, I served as Rapporteur for the ITRE Committee on the proposal for the General Data Protection Regulation, which represents the largest reform of data privacy law in the last two decades. As a result of my work in the area of data protection, cyberbullying and as Ambassador for CoderDojo, I was voted 2014 MEP of the Year for Digital Agenda.

Having been at the negotiation table for the General Data Protection Regulation (GDPR) on behalf of the ITRE committee, I am convinced that this piece of legislation is crucial as we move towards a more digitalised and data driven world. The Regulation strengthens citizens’ fundamental rights in the digital age and facilitates business by simplifying rules for companies in the Digital Single Market. Industry therefore stands to greatly improve processes and increase efficiencies from the better use of big data and data analytics, which should lead to increased growth and employment, whilst ensuring the protection of personal data during this digital transition. 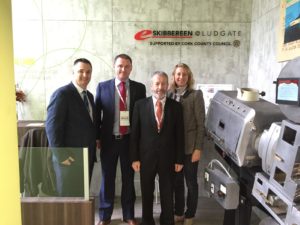 As an MEP who actively campaigned for the abolition of roaming charges since becoming an MEP in 2009 and as the only Irish member of the ITRE committee which was responsible for this legislation, I was delighted to welcome the coming into force of ‘Roam Like at Home’ in June 2017. This means that citizens may enjoy the same price plans for texts, calls and data whether at home or abroad.

Largely due to the great work of the European Parliament, we have made roaming available without additional surcharges for consumers, or undue costs for providers – it is a good and balanced approach. Moreover, with the end to roaming charges, we overcome another unnecessary barrier and make it easier for Irish businesses to take advantage of the Single European Market. SMEs are our biggest employers, yet currently only 7 percent of them sell across borders – this is one step in a broad strategy that further encourages and helps them to change this.

The future of the European economy rests on our own ingenuity, creativity and how we develop and apply our knowledge base. We must strive to foster innovation in our third level institutions and small to medium-sized enterprises (SMEs) as they are the drivers of economic progress. The ITRE committee oversees spending of €80 billion in EU research and innovation funds and is thus a key committee from both an Irish and a European perspective. 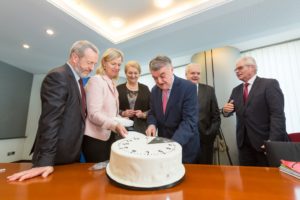