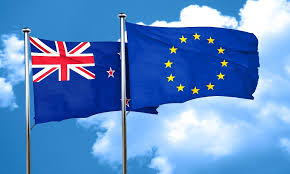 Sean Kelly MEP has voiced concerns for the Irish dairy sector as New Zealand pushes for a Free Trade Agreement (FTA) with the EU.

Mr Kelly, who is Ireland’s only member of the European Parliament’s Trade Committee, has sounded the alarm over the implications any free trade agreement would have on Irish agri-food exports:

“New Zealand is one of the world’s top agricultural exporters and mainly exports milk powder, butter and milk as well as meat, wood, fruit, and vegetables. Though it is currently focused on exporting to the Asian markets, New Zealand has been pushing for a FTA with the EU for many years now.”

“Recent negotiations on an EU-New Zealand Partnership Agreement on Relations and Cooperation (PARC), have aimed to deepen the relationship between Europe and New Zealand. This development and progress made on the EU-Canada CETA agreement may have reignited hopes for a similar deal with New Zealand, but I would caution EU leaders against too liberal a deal particularly with regard to agri-food products,” Mr Kelly said.

While Canada is not a major dairy exporter, New Zealand may have its sights set on Europe’s agricultural market. However, this would be to the detriment of Irish agri-food products like cheeses and butter etc as New Zealand would be aiming to export very similar produce to Europe according to the Ireland South MEP.

“We are facing a difficult year for the dairy sector with price volatility and predictions that the price of milk may fall to 27 cent per litre. From 2015, when milk quotas are abolished, we also need to support our dairy farmers as they expand production. Allowing a massive dairy exporter like New Zealand greater access to our market would negatively impact on Irish farmers.”

Mr Kelly added that because Ireland is particularly dependent on its agri-food exporters, as a largely agricultural country with a substantial dairy sector, it would be the most affected Member State by any such EU-New Zealand trade deal.

“Irish farmers are already working to meet huge expectations and targets under Harvest 2020 and in order to make the best of the post-quota era. I will be using my membership of the Trade Committee to ensure European leaders are conscious of these factors when examining possible trade opportunities outside of Europe.”