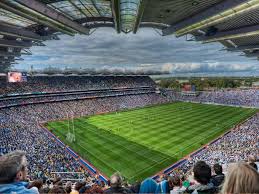 Tempus Fugit – how time flies! It is hard to imagine that it is ten years since the first ‘foreign game’ was played in Croke Park – or any other GAA Park for that matter – when the French came, played and unfortunately, beat Ireland in that first historic game. But strangely, for many people it is not the French game that is embedded in their memories but the game against the ‘ould enemy’, England, a fortnight later when ‘God save the Queen’s men’ came, sang, played and were, fortunately, beaten by Ireland in what has become a seminal, iconic and defining moment in Irish sport. Maybe it is the fact that Ireland won by a margin of 43-13 that helps keep the memory of that game to the forefront of our minds – but that’s only a small part in the greater significance of the game itself.

Many people have said to me since that day, whether they were at the game or watching it on television in Australia, Spain or farther afield, that they never felt so proud to be Irish as when both National Anthems were played in Cork Park on that historic Saturday afternoon. Phrases like “the tears flowed down my cheeks” (likewise for Flannery, Hayes and many of the players), “Ireland grew up that day”, or “we embraced the 21st century on that occasion” often flow off the tongues of many people when they recall that great day for Irish Sport.

Of course, there were those who could not accept the turn of events and who were not slow in making their feelings felt. A handful protested outside Croke Park, one carrying a banner captioned ‘Seán “Judas” Kelly – no foreign games in Croke Park’. Hilariously, some of these protestors were wearing Glasgow Celtic Soccer Jersies. Oh, what patriots! Others might wait years to have a go – I will never forget the day I was coming out of a shop and was greeted with “You f—ing creep, you let the English bastards into Croke Park”. Unfortunately, I had no way of breathalysing him to assert whether he was sober or not. Another, who really surprised and disappointed me, was a former highly respected GAA Official, who refused to shake my hand, saying, “I wouldn’t shake hands with someone who left the Anglo-Saxons into Croke Park”. Then there were the abusive letters and phone calls from those who were “brave” enough to share their views with me behind the mask of anonymity. But these critics were few and far between. Indeed, the most satisfying aspect for me is the many who have said to me – “Seán, we didn’t agree or support you in opening Croke Park, but I have to admit, it was the right decision. Congrats to the GAA”. It is also interesting to note that when the millions the GAA made on the opening of Croke Park was being divided up amongst the counties, no County Board that opposed the opening refused the money.

While most remember the England game clearly, the French game was also of major significance. The French were always ‘notre amis’ – we both flew tricolours, they sent expeditions to help our rebellions against the colonial power, and famous Irish artists like Beckett and Joyce found refuge on French soil, so France was the ideal country to kick off the opening of the Croke Park saga. It was a highly joyous occasion (barring the result), everything ran to a tee thanks to the meticulous planning and courtesy by Peter McKenna and the staff in Croke Park, and it was a wonderful game only snatched from Ireland’s grasp in the final moments. Immediately after the game, the defeat – and especially the manner in which we conceded defeat – hurt, but now it is little more than a statistic.

Skrela, the French out half, has the honour of being the first ever foreign player to kick a rugby ball in Croke Park as he took the kick off, and from there to the end it was party time for all the fans. Both the French and Irish fans, enjoying the historic moment, sang and cheered throughout the duration of the match, creating a lovely atmosphere, which paved the way for similar respect and bonhomie a fortnight later against the English. It was obviously the first time the French supporters were in Croke Park and afterwards they were loud in their praise of “votre grand arène”. For many Irish rugby fans, it was also their first time in Croke Park, which they went out of their way to appreciate and respect. And it was, also, the first time that some GAA fans attended a rugby match. For one anyway, he found it hard to leave his more expressive GAA habits aside as, when Ireland got the first penalty, he shouted out to Ronan O’Gara “Take your point O’Gara!!”. Habits of a lifetime cannot be changed in the heat of a battle. And, of course O’Gara obliged, taking all three points in fact.

After the match, there was a big reception in Croke Park for the ‘dignitaries’. It was here that the officials of the IRFU and FFR (Fédération Française de Rugby) so graciously expressed their appreciation to me and many other GAA officials for the welcome and hospitality shown to them by the GAA. I was particularly impressed by the parents and family members of the Irish players from Ulster who were so delighted to be present and so grateful to the GAA for opening Croke Park to them.

And, for many people, the real benefit and historical importance of the opening of Croke Park was that it helped to open minds, open doors and break down barriers – especially in Northern Ireland. Nothing breaks down barriers better than sport and the opening of Croke Park to both rugby and soccer was a hugely progressive step that reverberated far beyond the sports field. The all-island 32 county dimension of rugby was hugely significant and the playing of soccer ‘the garrison game’ in Croke Park also sent out a powerful signal in that the old ways of isolation and antagonism were over. Sport is about inclusiveness and this inclusive message had a profound effect on Northern Ireland and the breaking down of the ‘sporting barriers’ between the GAA and foreign games also helped break down barriers for traditionally polarised communities. Once psychological barriers are broken down, all others may fall as well. The Northern Peace Process was no doubt enhanced by the opening of Croke Park. All this gathered momentum and reached its full symbolism with the Queen of England not only paying the first ever state visit to Ireland but also to Croke Park where her Highness and Prince Philip, Duke of Edinburgh, were presented with a hurley and a sliotar. (Incidentally, when I met Prince Philip the following day I asked him if he got any chance to test his skills with the hurley and he responded “God Gracious chap, I’m not that daft!”)

While we are marking the 10th anniversary of the opening of Croke Park, the decision to make that possible goes back a further two years – April 2005 in fact when Rule 42, which enabled the process, was passed at the GAA Congress very appropriately held in Croke Park itself. As Uachtarán C.L.G. at the time, I have good reason to remember that campaign vividly. Indeed for observers this campaign, which was championed by some very brave GAA officials, went on for 5years and was a gripping drama which ebbed and flowed, raising emotions both within and outside of the GAA throughout that time. There were very few ‘neutrals’ on this issue and as debate raged on right across the country and in GAA units abroad, it became clear that there was going to be no easy ride or walkover for proponents of change. Getting the motions to open Croke Park on the Congress Agenda was a very difficult assignment that took a lot of strategic thinking and careful planning. Then, it required a two-third majority to have the motion passed. Indeed, it is interesting that ten years on, there are motions to this year’s GAA Congress to reduce the threshold to 60% (three-fifths), such is the difficulty in getting motions that have the imprimatur of Management and Central Council over the 66% threshold at Congress. But on that day in 2005, in a secret ballot, well over 66% voted to open Croke Park, and so created history, paving the way for the glorious period of international games of rugby and soccer, while the Aviva Stadium was being developed. These developments changed the nature of sport in this country and greatly enhanced the image of the GAA – a miracle! Will it not be truly great if the culmination of all of this will be Ireland hosting the 2023 World Rugby Cup, when not only Croke Park but another half a dozen Provincial GAA grounds will host major rugby games. This is a development to be wished for and shows how far we have come in terms of openness, inclusiveness and yes, commercial possibilities. The only complaint we hear now would be from some provincial grounds understandably wondering why they have not been included on the list of potential venues for the Rugby World Cup! And when Skrela took that first kick in Croke Park 10 years ago, could anyone have envisaged this scenario a decade later! Ah yes, indeed, all has changed, changed utterly, a wonderful beauty has been born.