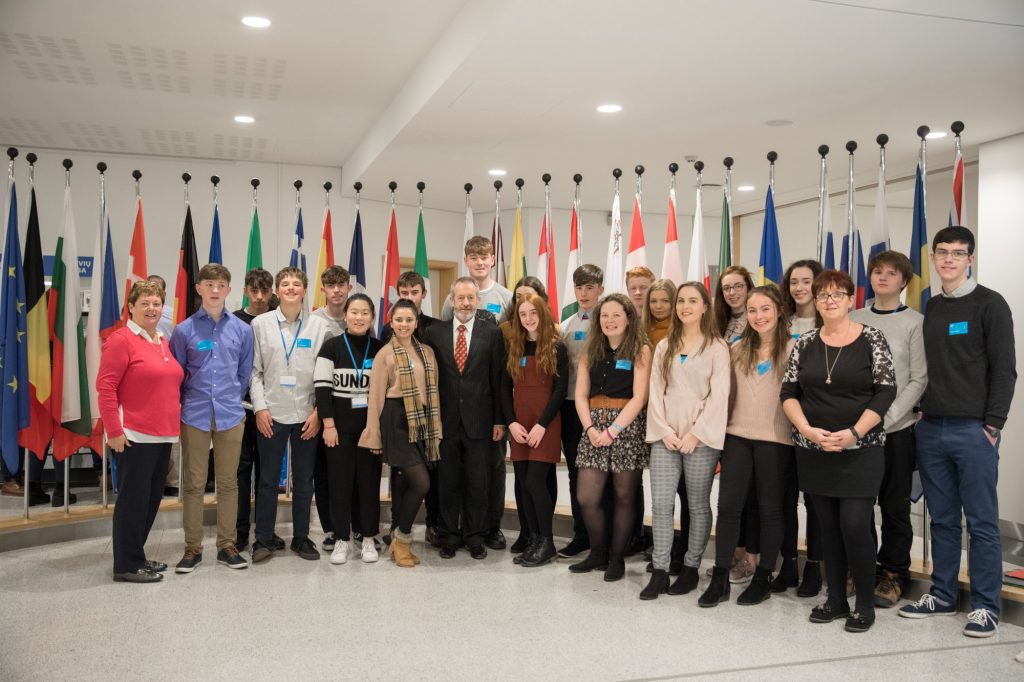 MEP for Ireland South and leader of Fine Gael in the European Parliament, Seán Kelly, has welcomed a group of Transition Year students from Ireland South to the European Parliament in Brussels this week. The students that travelled had earned their place on the trip by being selected as winners in Mr. Kelly’s annual ‘Meet Your MEP’ essay competition, which this year had the title ‘How Ireland can play its part in the global fight against Climate Change’.

The Group, which was made up of 20 students from Limerick, Tipperary, Kerry, Wexford, Clare, Carlow, Cork and Waterford, visited the European Parliament, the European House of History, and participated in a debate in the Parliament on ‘How to tackle Climate Change’.

“I am absolutely delighted to have been able to welcome such an impressive and enthusiastic group of students to Brussels to learn about the EU institutions and my work as an MEP. I organise this competition annually to encourage young people to involve themselves and get interested in the work of the EU, and it has proven to be extremely successful.

“This year I decided to change the theme slightly, and focused the topic on Climate Change. The essays we received were very impressive, and I was delighted to be able to organise a debate for them in the European Parliament to explain their ideas on what we need to do to address this pressing global issue.

“During the debate, they presented their ideas and exchanged views with Brussels-based experts on issues such as sustainability, renewable energy, plastics and the circular economy.”

Over the course of a busy three days in Brussels, the students were given a tour of the European Parliament, and met with Mr. Kelly who described his work as an MEP for Ireland South, his ongoing legislative roles, and how he represents his constituents in Brussels.

“I am always delighted to engage with young people on EU issues. As a former teacher, it is always a great pleasure to meet young people from my constituency and the visiting students were full of enthusiasm and were eager to learn.

“It was a pleasure to describe the work I do as part of the EU’s efforts to tackle Climate Change. The students were keen to discuss my role in negotiating the 2030 Renewable Energy target, the EU Single-Use Plastics Directive, and, of course, my work relating to the Paris Climate Agreement in 2015.

“I was very impressed by their level of understanding and passion for these important issues.”

Mr. Kelly concluded by thanking all who entered his essay competition this year:

“I would like to give a big thanks to all those who put pen to paper and submitted an essay this year, and indeed for taking an interest in Climate Change. The students I had the pleasure to meet in Brussels are an outstanding group of young people and it is clear that Ireland’s future is in safe hands!”, he concluded.