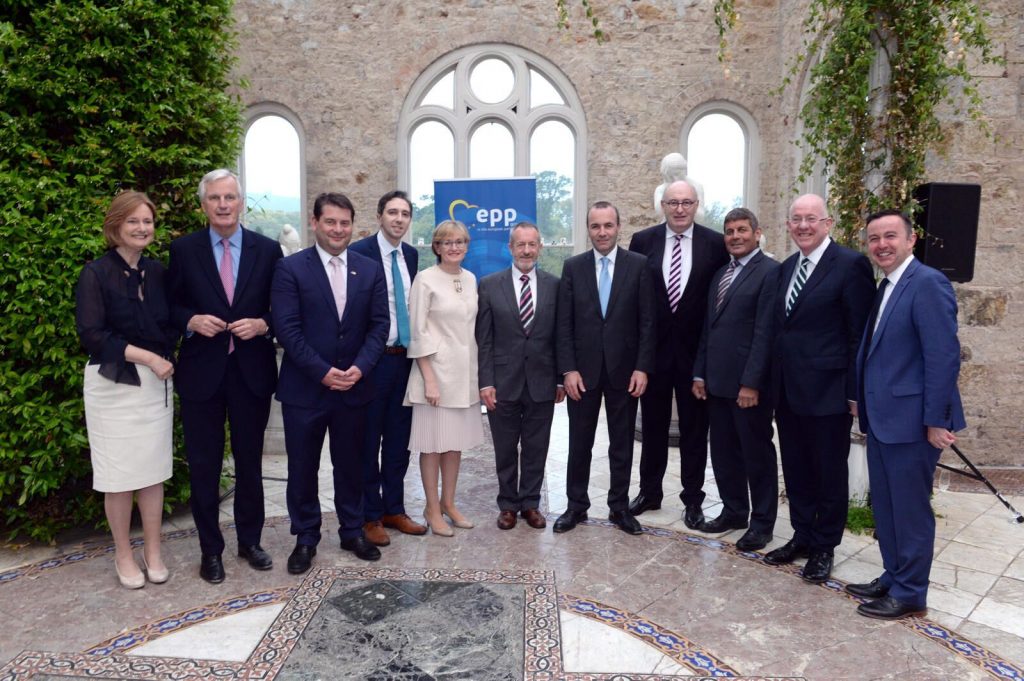 Leader of the Fine Gael Delegation in the European Parliament, Seán Kelly MEP, is hosting a meeting of MEPs belonging to the European People’s Party to discuss Brexit at Druid’s Glen Hotel, Newtownmountkennedy, Wicklow 11-12 May. Taoiseach Enda Kenny will make a keynote address at the event on Thursday morning, while other guest speakers include the EU’s Chief Brexit Negotiator, Michel Barnier, and former UK Prime Minister Tony Blair who will both attend on Friday.

“The gathering here this week for our EPP Bureau meeting is a timely one as we prepare for the commencement of the much publicised Brexit negotiations; negotiations that will have significant implications on the future of Europe, and indeed for Ireland’s prospects both economically and politically,” Mr Kelly said in welcoming attendees to his constituency on Wednesday evening (10 May).

Reflecting on the outcome of the UK’s Brexit referendum as “a great disappointment”, Mr Kelly noted that it was not shocking, as the UK was always a more sceptical Member State: “What is perhaps most irritating, however, is the manner in which misleading claims and falsehoods have duped the population of such a great country into making such an irrational decision. Of course, this is the situation we face, and it is one that will certainly prove to be extremely complex. The UK government’s vow from the offset to rule themselves out of both the Customs Union and the Single Market have left us in a position in which options for a post-Brexit arrangement are significantly narrowed,” he told MEPs in Wicklow.

“For Ireland, a country that will feel the effects of Brexit, particularly a hard Brexit, more than any other EU-Member State, this is worrying.  At this stage, we all know the figures: 600,000 Irish-born people live in Britain, 40 percent of our trade goes there, 80pc of all Irish exports pass through the British system. On top of this, half of our agricultural exports go to Britain; with no agreement, we revert to WTO rules and some of our exports would face tariffs up to 60pc. This really cannot be an option.

“It is plain and simple, if we fail to reach an agreement with the UK, Ireland will be the most affected. For this reason, I think it is vital that on both sides, negotiators refrain from taking a zero-sum approach – the goal should not be to win, but to reach the agreement that is mutually beneficial for all, and this will take significant skill. In Michel Barnier, I am confident we have the right man in the job, and I thank him for his willingness to cooperate with my delegation and government thus far.”

Despite all of the uncertainty and fear, MEP said he feels encouraged by how fellow members of the EPP Group have taken on board the Irish concerns and adopted them as priorities for the Brexit discussions.

“We must not underestimate the importance of Parliament’s cross-party support for our Irish concerns. Britain, our closest neighbour and often our closest ally in Europe, has chosen to leave the Union – there was a danger that Ireland be left isolated. However MEPs and Heads of Governments of the remaining EU-27 have moved quickly and decisively to make it clear that this was not the case, and I believe that this has resonated with the people of Ireland.

“This part of the reason why 9 in 10 Irish people believe we should remain part of the EU and indeed that we have benefitted from being a member of the EU – we have this strong commitment to the EU because we truly feel part of the EU family, we have an affinity with Europe that remains stronger most other Member States, and with your support during these difficult Brexit discussions, this will not change.”

Concluding, Mr Kelly added: “I am pleased to see such a good turnout here this evening from our Fine Gael-led government, and indeed some members from the grassroots of our party. Our government are the ones tasked with ensuring that our economy is ready for the impacts of this enormous political challenge and so it is important that they have the opportunity to meet with us all, the members of the largest political grouping in the European Parliament, and discuss the challenges that lie ahead.”