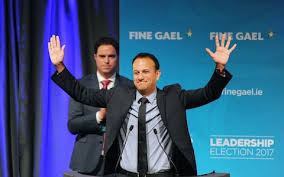 Speaking on behalf of the MEPs, Seán Kelly, Leader of the Fine Gael delegation in the European Parliament, said Mr Varadkar’s election is being warmly welcomed in Europe:

“At 38 years old, Leo Varadkar is the youngest ever leader of Fine Gael and the youngest ever Taoiseach. However, he has lengthy experience in terms of his interest in politics and a history of involvement with our European family, the European People’s Party. Indeed, Mr Varadkar has also served as a Vice-President of the Youth of the European People’s Party (YEPP) in the past, so he has a strong network of connections across the EU and would be highly regarded within our political family at EU level.

“Europe is at a crossroads, as we are all aware, and as we start to map out the future of Europe and examine new policies, and new ways of working within the Union, there is an opening for new EU leaders to bring something different to the table. Leo Varadkar would be considered to be dynamic and progressive, which is what Europe needs now, much like we have seen in France with the victory of Emmanuel Macron and more globally, with the positive leadership of Justin Trudeau in Canada. His election as Fine Gael leader and as Taoiseach epitomises the spirit of enthusiasm for the future in Ireland right now.

“Certainly, Mr Varadkar’s appointment to office has been warmly received here in Europe and we look forward to welcoming our new Taoiseach to Brussels when he begins his engagements at EU level in his new role. Mr Varadkar has a challenge ahead with impending Brexit negotiations and in ensuring Ireland stays the course towards full economic recovery, but Mr Varadkar’s experience in government and at EU level will stand to him. He has the full support of the four Fine Gael MEPs in his new role and we send our hearty congratulations to him today.

“We also congratulate Simon Coveney as the newly appointed Deputy Leader of Fine Gael – a unifying move which will strengthen the party from the grassroots to the cabinet,” Mr Kelly said, speaking from the European Parliament in Strasbourg today.

Mr Kelly also paid tribute to out-going Taoiseach, Enda Kenny, on behalf of his MEP colleagues: “Enda Kenny is considered a hero by the European People’s Party and rightly so. It was Enda Kenny who inherited an economic crisis from a previous government and stepped up to that challenge with great courage and strength, managed to exit that bailout successfully and firmly set the country on the road to recovery. Most recently, he ensured that Irish Brexit concerns are clearly and unequivocally understood at EU level, achieving significant support for the Irish priorities. We are grateful for the leadership Enda Kenny provided. We are very proud of his achievements and wish him and his family well for the future.”